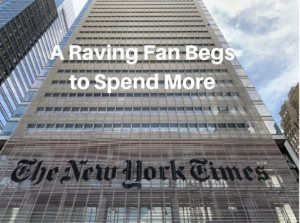 In my presentations and in working with individual clients, I suggest creating a "velvet rope" for your raving fans, the segment of your clients who love what you do so much they'll be attracted by a premium offering with benefits exclusive to them.

Raving fans see so much value in your product or service that they will seek a deeper dive into what you offer. That could be a “behind the scenes” experience, special recognition as a premium customer, or other exclusive benefits not available to other customers.

Sometimes your fans are so passionate they’ll plead to spend more, if you’re listening.

Tim Caulkins, Clinical Professor of Marketing at Northwestern University’s Kellogg School of Management, recently published a blog post illustrating the point, using himself as an example of that raving fan:

I would happily pay more for the New York Times. It is the first paper I reach for each morning (I get the NYT, FT, WSJ and Tribune). I now listen to The Daily, a wonderful podcast (if you aren’t listening to it, you should start!). I also believe the New York Times provides a valuable public service – an independent press is essential to maintain our democracy. The New York Times has been investing in its brand. I am happy to support the Times.

Professor Caulkins identifies several sources of value he receives as a New York Times subscriber. Some are tangible, like “The Daily” podcast. Others, though, are substantial intangible benefits he receives as well, such as the feeling he receives from supporting independent news.

Your most passionate fans see you as more than a purveyor of goods and services. They might see a cause or a mission. Often they see more in you than sometimes you see yourself.

And they’re willing to pay for the value they see, too.

Professor Caulkins goes on to speculate about what a platinum subscription might include, what it might cost, and the financial impact such an offering might have for the New York Times:

Now for many people, the idea of paying anything for news seems odd. For this group, it makes sense to have discounted offerings. I suspect only a few people would pay for a super-premium subscription. Still, if even 3% of the current 4 million subscribers upgraded to a plan costing an extra $3,000 per year, it would generate $360 million per year, with few incremental costs.

As he implies in his analysis, the number of raving fans for any business is a small percentage. Even at the 3% assumption he makes, though, $360 million a year would represent an extraordinary addition for a company which reported just over $1 billion in revenue in 2018.

Listen to and study your raving fans. They might even prod you by publishing a blog post.

If you listen, they could dramatically change your business.

Photo by David Smooke on Unsplash