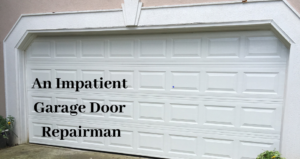 One day I woke up, sleepily took care of our morning potty time for our dogs. As I brought in the last one and lowered the garage door, disaster struck. As the door lowered, it crinkled.

My wife couldn’t get out of the garage; fortunately, I was parked outside and could take her to the school where she teaches. On the drive over, she asked who I was going to call about our problem. I have no idea, I told her, but I’ll work it all out.

After I dropped Dr. Ray off, I went straight to my desk and started my own work. I could deal with that garage door later.

A few hours went by. My wife, a teacher, called me during her lunchtime planning period to check on how that garage door repair was going.

Dr. Ray has a keen nose for bull. “You need to know that I am not spending the night in that house tonight if that garage door is not fixed.”

You might say my priorities had suddenly been realigned. I had to get on the stick and make something happen.

I didn’t have a contact among garage door installers, so I did what most people do in such circumstances these days:  I went online. I looked for a garage door expert with what seemed to be satisfactory and legitimately honest reviews.

I found a nearby provider who seemed pretty good, and I gave him a call. I described the problem, gave him my address, and texted him pictures of the door along with measurements of the door panels.

After a few minutes, he called me back. “I’ve got the panels we need to replace the door,” he said. “Are you open for me to come out there this afternoon?”

“Yes,” I said, trying to damper my excitement.

I get a sizeable discount for paying in cash and I’m not going to be in trouble with Dr. Ray? I felt like I was at the casino and three cherries had just come up on the slot machine.

I had no idea what a garage door replacement like this should cost. I had visions of four figures dancing in my head before this conversation, so that’s what I was braced for.

In his impatience to get the job (and seemingly to avoid taxes by receiving cash), my garage door repairman screwed up.  He was focused only on the job at hand, not the why of the job.

He didn’t have a value conversation with me, his client. He never asked me any questions that would have revealed my sense of urgency.

He could have asked questions such as:

He could have said then said, “my crews are pretty busy right now, and we’re more than halfway through the day today. When did you need to have the work completed?”

In the services business--home, professional, or otherwise--the price you ultimately receive is based in part on your willingness to have a value conversation which taps into the hopes, fears, dreams, and other emotions which are bubbling within your customer.

Your impatience can cost you a lot of money, like it did my garage door repairman.

And you might be like I imagine he could be, wondering why you’re working so hard for so little on the bottom line.