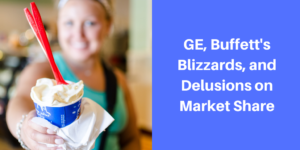 Sometimes I run into articles which are so lethal for the bottom line of a small business, I can’t just hit delete and move on.

This article on market share veers from one pundit bemoaning the fact that the small business share of the economy has declined to another pontificating that every business should aim to be #1 or #2 in their market.  What does the former have to do with your business or mine? Absolutely nothing; as much as you or I may not like it, we cannot control some macroeconomic measure.

As for trying to achieve first or second market share status, consider the dumpster fire that an American business icon, General Electric, has now become. The stock now trades at almost 90% less than the peak price it hit 20 years ago.

The circumstances behind of GE’s precipitous fall from grace are complex. What’s fairly clear, though, is that the company is still recovering from a 1990s strategy that then-CEO Jack Welch championed of seeking to hold a #1 or #2 market share in every business segment.

Consider, on the other hand, Dairy Queen. What makes Dairy Queen so special? It’s a number of things, but market share isn’t one of them. Their market share would still be considered anemic by gurus championing the importance of market share:  according to this ranking, they’re #17 among quick service restaurants.

While Dairy Queen’s market share controls a relatively low market share in the fast food industry, what makes the business special is the pricing power it possesses in soft serve ice cream products. Stopping at Dairy Queen for an ice cream treat is almost a ritual for many customers. If you or your family love a Blizzard®, you’re not deterred by the knowledge, assuming you’re paying attention, that the price of a Blizzard might have gone up a dime since the last time you visited your local Dairy Queen.

Warren Buffett bought International Dairy Queen in 1997 for $585 million. As I’ve written previously, Buffett relies heavily on his assessment of a company’s pricing power as he decides whether to make an acquisition. Even more than good management, pricing power, Buffett has said, is the “single most important decision in evaluating a business.”

So how has the Dairy Queen acquisition turned out? According to the 1998 Berkshire Hathaway Annual Report, IDQ’s revenues that year were $420 million with operating income of $58 million. Today, Dairy Queen today has revenue at around $3.7 BILLION annually, based on what I can tell (based on data reported by industry trade publications, as Berkshire no longer discloses DQ’s results). Assuming Dairy Queen’s operating profit margin in 2019 was the same 13.8% reported in 1997, their operating profit last year was roughly $460 million.

How’s this for some irony:  during the financial crisis of 2008, Buffett delivered a $3 billion rescue to General Electric as they teetered, trying to survive. Buffett’s ability to comfortably make that investment was enabled by the long-term ownership of Dairy Queen and a diverse group of other businesses purchased more for their pricing power than their market share.

If you’re a small to medium-sized business owner, you’re much better off in the long run understanding the perceived value you provide to clients, enhancing that value, and pricing based on that value. If that’s your strategic focus, you might not be able to boast of a number one market share. What you will have, though, is a bottom line—and dividends for you as the owner—which will be quite satisfying.