George Westinghouse on the Value Equation 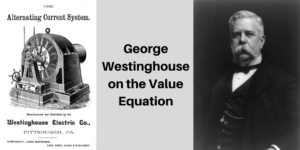 Well, probably not George Westinghouse himself, but the words put in his mouth.

I recently watched The Current War, a movie which tells the story of the race between Thomas Edison and Georgie Westinghouse to sell their competing visions of an electrical grid in the late 1800s. Edison pushed his original vision of direct current, while Westinghouse championed alternating current.  Westinghouse’s vision won, as alternating current was much more effective and less costly distributed over long distances.

At one point in the movie, Westinghouse says:

This statement is the value equation at work. When a client assesses your service or product, they are judging the contribution your services will make to their business and their life. For them to buy, they must perceive that the benefits they receive, whether in money earned, time saved, pleasure derived, or something else, as more than the price they pay.

The only person who can determine this value is the client. It’s their perception, their determination, of that contribution.

As depicted in the movie, Westinghouse used the value equation to his advantage. After Edison reneged on paying the talented inventor Nikola Tesla a promised $50,000, Tesla quit, and Westinghouse pounced. He offered Tesla a royalty of $2.50 per AC horsepower, which would amount to much more than a flat $50,000. Tesla accepted, and Westinghouse’s vision was on its way to realization.

The actual history is a bit more complicated, but movie illustrates the point quite well. All Edison sees is that $50,000 is an immense amount of money. His ego keeps him from seeing Tesla’s value. Tesla has no perceived value to Edison.

Westinghouse, on the other hand, sees that the long-term contribution Tesla can make to his company dwarfs even a royalty payment like the one he proposes. The value which is at stake is immense:  the opportunity to build the electrical grid for the entire United States.

That’s the value equation at work, Westinghouse and Hollywood-style. It’s utilized by the buyer in every transaction.