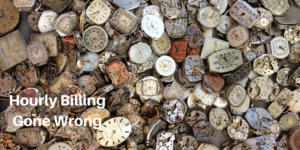 From a book I strongly recommend:  The Infinite Game, by Simon Sinek:

“I used to work for a large advertising agency. After my first year at the company, leadership decided to implement time sheets. Unlike a law firm, where a lawyer may be billing their clients for the actual number of hours of work, this was a way for the company to keep track of . . . actually, no one really had any idea of the utility of the time sheets. It was just something we were told to do.

“I managed to get away with not filling out mine for months (if they were tracking how I spent my time, I saw no point in telling the company I worked 100 percent on the one client to which I was assigned). Of course, I got in trouble for not turning in my time sheets. And so, from then on, at the end of every month, I sat down with all my time sheets and filled them out in one go—in at 9:30 A.M., out at 5:30 P.M. In reality, I often came in earlier and left later. But who cares. I recall taking my time sheets to my boss for his signature. He looked them over and commented sarcastically, “You’re certainly a very consistent worker, aren’t you?” And then he signed them.

“I have to believe that the time sheets were implemented because something went wrong in accounting. Perhaps a client was overbilled for work done and demanded that the agency prove that the senior people who were promised to spend time on their account actually were the ones who spent time on the account . . . or something like that. . . .”

Was the problem really in the accounting department?

No, the problem arose because of a billing method which invites inaccuracies, abuse, and worse.

Note that Sinek says his time sheets were fiction because he underbilled, not overbilled. The flaws in hourly billing don’t always cheat the client; they often cheat the professional sending out the bill.

This is one reason I tell professional services providers that if they are billing by the hour, by definition they are underpricing their services.

You might ask, though:  how does underbilling with a time-based billing method shortchange the client?

The problem is simple:  when the client gets that bill, they don’t necessarily know that all the hours aren’t billed. An invoice based on time invites questions like:

All these questions are misdirected. None of them address the most central point:  did I, as the client, receive more value than what I paid in fees? Sometimes clients may start questioning a services provider who’s actually providing great value because the bill focuses attention on inputs which have nothing to do with value received.

Hourly billing is nuts, because it cheats both the client and the services provider, often simultaneously.

Photo by Heather Zabriskie on Unsplash