Nice, Kind, and Your Services Business 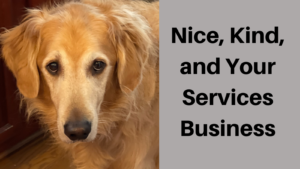 As you manage relationships in your professional services practice, it’s important to understand the difference between nice and kind.

Several years ago, I was invited by a local economic development official (let’s call her Anne) to sit in on a meeting with a entrepreneur opening a new business concept. This project required a significant investment on his part, and this entrepreneur, who I’ll call Bob, wanted feedback from several business professionals on his concept.

Bob delivered a presentation of his plans, including the market for his service, amount of investment, etc.

I began to feel like my sole purpose, along with the others who’d been asked to join this meeting, was to serve as a potted plant, making the scene look tranquil but to stay quiet and acquiescent.

Finally, I had an opening to ask a question, and then another one, and more after that. The questions I asked were about holes and inconsistencies I saw in his business plan. For some of the questions, Bob had thoughtful answers. For others, he scratched his head, took some notes, and said he’d have to do further work.

The exchanges were direct, yet friendly. That’s what I thought, anyway.

Anne pulled me aside after the meeting.

“Is there something wrong with you?,” she said. I could tell by the way she asked the question that she wasn’t really interested in my health and welfare.

“You asked questions which bordered on rude.”

“I thought we were here because Bob wanted feedback on his plans.”

“All your questions were negative,” she replied, “you didn’t have to get into everything that was wrong.”

Anne never invited me to any meetings like this again.

“You were the only person in that meeting who asked me any tough questions. What you asked made us think and helped us sharpen our plan. We’re better off because of it.”

It would have been enough if he’d just called to tell me that, but he wanted to hire me for some consulting related to his pricing. He said he knew I’d tell him what he needed to hear—what was good for the project—instead of just what he wanted to hear.

This guy, I thought to myself, is going to be successful. He’s a mature entrepreneur who understands that asking for feedback meant sometimes receiving constructive criticism which would be vital to honing his plans.

As a professional services provider, your job is not to be nice. The best clients, in fact, don’t want nice. Their primary concern are the outcomes you can help deliver. They want you to diagnose and fix their problems, and yes, be kind while you do it. The best clients don’t have time for shallow backslapping, and they are willing to pay you fees commensurate with the value you deliver.

Anne thought Bob wanted a room full of Golden Retrievers, wagging their tails at everything he offered up.

On the contrary, what Bob wanted most of all was help getting to his desired outcomes, and he was willing to pay for that value. And, yes, as a result, his business has been successful.