Ray Charles and the Sparse Applause of Raving Fans 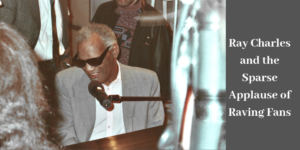 Near the end of his career, Ray Charles came to be appreciated for the great artist he was. By the time he died in 2004, Charles had received the Grammy Lifetime Achievement Award, a National Medal of Arts, Kennedy Center Honors, and was one of the first inductees into the Rock and Roll Hall of Fame.

Before a lot of those awards, however, Ray Charles experienced a time when few cared about him anymore. As with many artists with long careers, Charles suffered a dip in his popularity during a period in which musical tastes changed. For him this time was the 1970s and early 1980s, when musical styles in both rock and R&B trended toward hard and loud.

When you’re a musician playing after a match involving a barely surviving professional sports team, you’re there for one reason only:  to pull a few folks in who ordinarily have no interest in what amounts to pinball soccer. A few folks the owner of that team can’t squeeze a dime out of otherwise. I was one of those patrons.

Once the match was over and the stage was prepared, Ray Charles came out to scattered yet enthusiastic applause. As much as I wanted to hear him play, a part of me was sad I was there to witness this.

He was guided to the piano and sat down. He extended his hands over the keyboard, paused, and started to play the first few instantly recognizable cords to “Hit the Road Jack,” one of his most famous tunes. The audience clapped in delight.

Something was off, though. His background singers apparently weren’t quite on the right beat.

He suddenly lifted his hands from the keyboard.

“Stop it, stop it!,” he yelled into the microphone. “These people have paid to hear us and they deserve a lot better than this!”

He paused, and then went on, “Let’s start again and get it right this time!”

The band started again and apparently got it right that time. The concert went on, and it was fantastic. Those of us who stayed to the end gave him and his band a standing ovation. It was the sparsest standing ovation I’ve ever witnessed. The applause seemed to echo.

I spoke with a client recently who’s struggling with her business. She’s extraordinarily competent in her field, yet her tribe is small. She wonders whether she should give up, or double down and keep going. I can’t answer that question for her, as there’s a lot that goes into that decision, like family and finances.

Raving fans will sacrifice, pay premium prices, and fight traffic out to a Chicago suburb on a rainy night. Raving fans are oxygen for an artist—or entrepreneur—who feels like they are barely breathing.

I was willing to drive out sit through a forgettable indoor soccer match to hear someone who I consider one of the greatest musical artists of all time. Ray Charles rewarded me and the rest of his fans that by playing and singing as passionately for our sparse group, scattered around a half empty suburban Chicago arena, as he would have if he were in Carnegie Hall. We knew it and felt it deep in our psyche as we listened to him. That’s one reason we loved him.

Raving fans, even a tiny group of them, are an asset. Hope this helps.