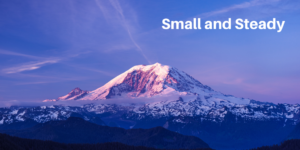 My first wife died at age 39 after battling pancreatic cancer.

In the grieving over her death, I lived in a zombie-like existence in which all I did was exist. I went through the motions of life in a haze. I gained weight, and endured sessions with a grief counselor who seemed even sadder and out of sorts than I was.

At a certain point, I knew I had to make changes.

I made two decisions. First, I fired my grief counselor, and I decided to climb Mt. Rainer. The former was easier than the latter.

The decision to climb Mt. Rainier didn’t come out of the blue for me. One thing on my wife’s bucket list she really wanted to do before she died was to climb Mt. Rainier. That mountain has a strong pull for natives of Washington state, which she was. She never got to make that climb, so I decided I’d do it for her.

I’d never attempted anything so physically rigorous in my life, and I was in the worst shape I’d have been in thanks to a lot of time on the couch with ice cream. Further, I lived in Memphis at the time. If you know the topography of Memphis, you don’t have to be a mountain climbing expert to know that Memphis is not the ideal spot to train for a climb. It’s as flat as a tabletop.

So I did what I could do:  I ran, or I’d go to the gym and stay a while. I’d be there literally for two to three hours sometimes, switching from machine to machine, from stair climbing to stationary bike and back.

It was an arduous road to get back not just to where I’d been, but to get to a point where I could even attempt to climb one of the tallest mountains in the continental United States. One of our climbing guides told me that there are marathoners who don’t make it to the summit of Mt. Rainier--that’s how challenging it is. I had that little soundbite bouncing around in my head on the way up.

At the end of it all, I made it to the summit, almost exactly one year after my wife’s death. The physical exertion and pain of it all would take an entire other essay to depict. The path to the top of that mountain started in despair, frankly, and was excruciating, full of pain, blisters, frustration, sore knees, setbacks, detours, and tears.

Among the many lessons I learned in preparing for and climbing Mt. Rainier was that small and steady persistence, in the face of all the challenges, was the only path to the summit.

As a business owner, a lot of what you’re dealing with right now feels like a death. The world has changed and will never be the same. You know it, even if down deep in your gut. You know that the “gurus” claiming we all just need to “get back to work” and things will be like they were before are either too inexperienced to know what they’re talking about or living out a hope instead of the reality.

Whatever a recovery looks like, the world we live in and the business opportunities it offers won’t be the same. Life doesn’t work that way, and this pandemic and whatever aftermath we have ahead of us is no different.

You may be one of those business owners reminiscing on how the big wins have been taken away. The leaps in customer counts or order sizes which seemed to come frequently. The record year you had last year that you just knew would be a springboard to an even better year in 2020. It’s gone. There’s a lot of sadness and even grief in thinking how quickly that environment evaporated.

Worse yet, you could be one of those business owners mourning the loss of your business. You may see the handwriting on the wall, or maybe you’re already in the process of shutting down. You may be in despair right now.

As you rebuild your business, maybe start a new one, or even just rebuild your life, you cannot mourn the past so deeply that you remain at whatever your equivalent of stuck on the couch with a half-gallon of ice cream is. However you get there, you’ve got to decide to get off that couch and begin anew.

The start, whatever that looks like for you, requires a clear-eyed acceptance that the world has changed. It also requires that you believe in the power of the persistence of small and steady steps each day. Small and steady is what will take you out of whatever place you find yourself in.

Those pre-pandemic glory days you were enjoying? You are now called to remind yourself that you didn’t get to the days of easy wins without a lot of painful steps, setbacks, and grit. The cumulative effect of incremental gains and little wins is what got you to whatever place on your mountain you reached.

Persist in hope. Don’t worry how inconceivable a recovery for you might be. Believe in the cumulative power of small and steady. It will get you back on that mountain.

Photo by Lucas Davies on Unsplash