The Price of Air in New York City 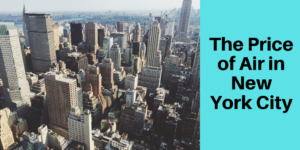 What’s the price of air in New York City?

If you’re walking down the street, the price is zero, just like it is in Atlanta, Houston, or Topeka.

If you’re living in a New York City high-rise, the price of air is $11 million.

The New York Times recently reported on a group of loft owners who discovered a developer planned a tower for the property right next door. As designed, this tower would have blocked their views of the Empire State Building and the cityscape generally.

Instead of engaging in a court fight, the outcome of which would have been highly uncertain, these loft owners collectively pay the developer $11 million to buy the air rights on the neighboring building. The developer then proceeded with a different plan, building a new and smaller commercial building, no higher than the one previously occupying that spot.

One New York real estate executive was quoted:  “I’ve never heard of that much cash being spent for an intangible, for a view.”

Getting your view obscured when you own a multi-million loft in New York City is a First World problem, to be sure.

The point, though, is that even air, a good available entirely free to all human beings across the planet, becomes highly valuable depending on the frame of reference through which this good is viewed by individuals.

In pricing, context is vitally important.

What’s the context surrounding your product or service? How does it affect your pricing?

Photo by Robert Bye on Unsplash