There is No "New Normal" 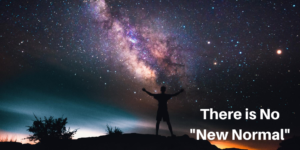 There is no “new normal.” There’s not a “forward normal,” nor a “next normal.” There never was a normal to begin with. “Normal” is a mirage.

If your vision of “normal” involves some version of stability for your business, you’re waiting for a time which will never come.

All of us exist in a universe in flux, one which has been expanding since the Big Bang. Recent observations from the Hubble Telescope reveal that the universe is expanding faster than scientists’ previous calculations would suggest should be the case. So not only is the universe expanding, but we as humans don’t even have a reliable explanation for the pace of that change.

This is the universe in which we live, in constant movement which is imperceptible to our limited awareness. It’s not just a metaphor, but an underpinning for every aspect of our lives, including business.

In business, players come and go, rules and norms change, innovations sprout, and there is no fixed end to the game where one determines winners and losers. It’s an infinite game, as Simon Sinek explains brilliantly in his book of the same name.

Just ten short years ago, only about one-third of all Americans owned a smartphone. Today, not only is that percentage well over 80% of consumers own a smartphone, but about two-thirds of those smartphone owners admit to sleeping with their phone.

Don’t make the mistake of thinking this rate of change is a 21st Century phenomenon or that change is happening “faster than ever.” It took roughly ten years, from 1929 to 1939, for usage of the radio in the United States to rise by the same proportion as smartphone usage, from about one-third to over 80%. (Note that those years encompassed the Great Depression.)

Admittedly, the changes foisted upon us by a pandemic have been jolting. But there’s nothing unique about shocks; they are baked into the fabric of our universe as well. The surface of the earth is always moving, and earthquakes happen.

Rapid, jarring shifts which we reluctantly confront doesn’t happen too frequently, but it’s not unusual, either. Who can forget September 11th and the way that event dramatically altered our lives?

So what’s required not just to survive but to flourish in an environment where there not only is no “normal,” but one that is situated within infinite change?

In his book, Sinek offers an answer:

Courage, in the Infinite Game, is not solely about the actions we take. Even leaders who operate with a finite mindset can take risks. Courage, as it relates to leading with an infinite mindset, is the willingness to completely change our perception of how the world works. [emphasis mine]

Whether you are in a career change, managing your own business, or working for a company, this perspective fits. Courage is a mindset toward change. It’s not just intellectually accepting change but acting upon that knowledge. It’s understanding that pivots don’t always come only after pandemics hit. You are always being invited into continual and endless transformation.

In my world of pricing, by the way, I always remind those I work with that pricing is a journey. There’s not a fixed destination that you can aim for, and once safely reached, put your feet up on the desk and bask in your achievement.

Leaning into change is not the way we humans are physiologically wired. We gravitate toward the habitual, the known, those things that makes us feel secure. All of us seek reassurance, no matter what brave face take on.

Yet one key measure of how effective we will be with our business or career will always be how well we lean into those physiological winds and embrace uncomfortable changes.

We must accept the idea that “normal” is an illusion.