When You Don't Know What to Do 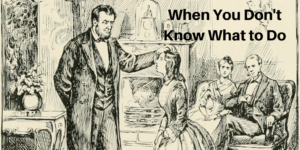 When you’re a business owner, what do you do in a crisis when you don’t know what to do?

That’s a problem a lot of business owners have right now. Some are stuck like the proverbial deer in the headlights, with sales at a fraction of what it was only a few months earlier. Thoughts like “how should I change my business?” or maybe even “should I shut down?” are the frank questions many business owners are dealing with.

You could do a lot worse than simply seeking out your customers and prospects, asking questions, and listening without prejudice toward a preconceived point of view.

Imagine being elected President of the United States and the country is in such turmoil that states are succeeding before you even take office? That’s what Abraham Lincoln confronted after his election in 1860. Before his inauguration on March 4, 1861, six Southern states had succeeded to form the Confederacy.

In her book Team of Rivals, historian Doris Kearns Goodwin describes Lincoln’s ability to meet with others, listen, and by doing so put himself in a position to understand their values and needs quite deeply:

. . . He possessed extraordinary empathy—the gift or curse of putting himself in the place of another, to experience what they were feeling, to understand their motives and desires. The philosopher Adam Smith described this faculty:  "By the imagination we place ourselves in his situation…we enter as it were into his body and become in some measure him."  The capacity Smith saw as "the source of our feeling for the misery of others . . . by changing places in fancy with the sufferer . . . we come either to conceive or to be affected by what he feels."

Lincoln’s curse, by the way, was to so empathize with others, suffering as they suffered, that he endured depressive states his entire life. The upside of what he received from his capacity to listen and empathize, though, was an extraordinary ability to diagnose what to do as the world was in flames around him.

“His crowning gift of political diagnosis,” suggested Nicolay, “was due to his sympathy….which gave him the power to forecast with uncanny accuracy what his opponents were likely to do.” She described how, after listening to his colleagues talk at a Whig Party caucus, Lincoln would cast off his shawl, rise from his chair, and say:  “From your talk, I gather the Democrats will do so and so…..I should do so and so to checkmate them.: He proceeded to outline all “the moves for days ahead; making them all so plain that his listeners wondered why they had not seen it that way themselves.” Such capacity to intuit the inward feelings and intentions of others would be manifest throughout his career.

A crisis in any circumstance involves taking action to meet that challenge, but action without understanding is a fire hose at full blast with no one holding on. Lots of commotion, but not many solutions targeted directed at the problems.

Asking questions and listening clarifies direction. It did for Lincoln, “making [his moves} so plain that his listeners wondered why they had not seen it that way themselves.” It’s one of the characteristics which made Lincoln remarkable relative to his political colleagues (who, I’m sure, thought they were effective listeners themselves.)

Resolve, business owners, whether you’re in a crisis or not, go out of your way to understand the needs, hopes, desires, and values of your customers and prospects. Ask questions, listen, and empathize with their problems. They will tell you what you need to do.