Will the Last One to Leave Please Turn out the Lights? 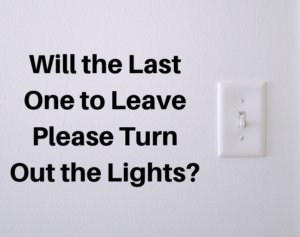 I started my career at J.C. Bradford & Co. , a Nashville-headquartered investment banking firm. By the time I joined the firm as a wide-eyed puppy, the founder and firm’s namesake had retired. He would make only very occasional appearances, as his health was declining. When he dropped by, Mr. Bradford—and everyone, even senior officers, called him--would walk around, say hello, and offer great stories.

Mr. Bradford became a legend in large measure because his firm, which he founded in 1927, survived the great stock market crash of 1929 and the Great Depression which followed. It’s hard to overstate what a feat that was. The value of a seat on the New York Stock Exchange reached a peak of $625,000 in 1929 prior to the crash. Mr. Bradford purchased a seat in 1930 at what must have seemed like a bargain, at $400,000. By 1940, however, the value of an NYSE seat had fallen to $19,000. Yet J.C. Bradford & Co. was the only investment firm in Nashville to survive this turbulent period, going on to become one of the largest such firms based in the Southeast.

As he walked around saying hello to young folks like me many years later, one thing he said which has always stuck with me is “make sure you’re worth more than what you get paid. If that’s the case, you’ll be the last one around to turn out the lights.”

Spoken like a man whose firm survived a stock market crash and the Great Depression.

There’s a lot of talk right now about recession, and with good reason, in my view. That said, I’m mindful of the old joke about economists, that they’ve predicted nine out of the last five recessions. There’s a reason it’s an old joke which keeps getting retold, because there’s truth there.

If the so-called experts can’t predict the gyrations of a mind-numbingly complex multi trillion-dollar economy, then you can’t run your business based on economic forecasts, either.

What you can do, though, is what you must continually make a practice of:  make sure that your customers see more value in what you provide them than the amount of the checks they write you. This principle holds wherever you find yourself in the economic cycle, what industry you’re in, or how old your business is.

Some of these are hard questions to ask objectively, and the answers are even harder to absorb sometimes. Yet this is the “recession check” you’ve got to do, constantly, in order not just to thrive, but to survive.

Photo by twinsfisch on Unsplash