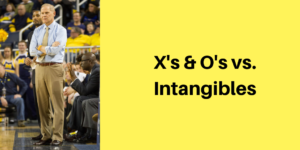 After a 14-40 start to the season, John Beilein resigned as coach of the NBA’s Cleveland Cavaliers. He didn’t even last his entire first season as an NBA head coach, even though he came into the league with a stellar record as a collegiate coach.

There’s a message for us professional services providers in this story, furnished from an analysis of the situation with Beilein and his Cavaliers team posted by The Athletic:

“In his first days on the job, he relished telling people he was finally “just a basketball coach.” In his mind, this would be the purest form of the job. At last, he thought, he could test his coaching acumen at the highest level and not worry about recruiting calls or what schools were cheating or if he was going to lose players as early entrants to the NBA Draft.

In reality, by going to the pros, Beilein became a teacher without a classroom. In his world, film study is sacrosanct, but in the NBA, team film sessions are sparse. (Players often get most film during pregame shootaround, watching themselves on an iPad with an assistant.) In his world, the practice court is his lab, but in the NBA, practices are … understated.

Obviously, it was naive to think coaching in the NBA amounted to designing ball-screen offense and enjoying directing the otherworldly talents of NBA players. This was his blind spot, one Beilein was warned about by more than a few people. Coaching in the NBA is as much about relationships and handling personalities as it is about X’s and O’s. . . . [emphasis mine]

Beilein’s mistake, it seems, was thinking his “content,” his knowledge of the game and his ability to teach it, would continue to determine his success, even at highest level of the game. He was obviously wrong.

At a certain point, our “X’s and O’s,” our content, is not what matters most. It’s not that our knowledge or technical skills aren’t important, even though I say exactly that to shock people out of their complacency. It’s that, in the minds of our clients and prospective clients, our knowledge and technical skills are assumed.  Our “content” is not our value moat, what we offer to our ideal clients that seemingly no one else can. Our value moat consists of those qualities, often intangibles, which allow us to attract and retain clients at premium pricing.

It’s often other factors, factors which are often intangible, which our clients see as valuable to them. For example, I recently encountered a CPA whose value to his clients was his ability to navigate and mediate relationships.

What takes you to the top echelons of any professional services field, where you deliver significant value which leads to premium pricing, are intangibles which may have little to do with the knowledge which got you there. Whether it’s accounting or coaching, your value to clients (and by extension, your ability to achieve premium pricing) is directly tied to your ability to determine what those qualities are and deliver them to clients.